The final map, which now goes to the Colorado Supreme Court, provides an outline of the politics of the newly designed congressional districts and what changes can be expected in the delegation. Of course, one new seat will have to be filled. In general, the map favors Colorado’s seven incumbents and creates a very competitive new district, the 8th. One significant factor outside of Colorado affecting the 2022 Colorado congressional election is the strength or weakness of national Democrats. 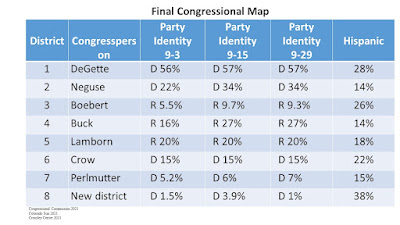 A quick review of the new districts and the possible impact of the 2022 election, including the possibility of some changes, especially in the Democratic delegation:

District 1 – Diana DeGette is in Colorado’s safest seat. Her challenge is changing national politics that may nudge her to retire. The Democrats are likely to lose control of the House and Nancy Pelosi may be in her last term as speaker. Moving to the minority without Pelosi, a friend and mentor, could signal the end.

District 2 – Joe Neguse’s seat is also safe for him. His decision to keep running is at least partially a function of his lack of seniority in the institution than rewards it and the possibilities of making millions in the private sector.

District 3 – Lauren Boebert’s seat was greatly improved for Republicans by the final map – a major disappointment for Democrats. They believe Boebert could have been beaten in previous iterations of the map. Boebert is likely to be challenged, but was provided partisan help.

District 4 – Ken Buck appears secure, but the district may shift to its Front Range voters should he retire.

District 5 – Doug Lamborn only has primary problems. His seniority is accumulating. And he will have influence in the next House if Republicans control it.

District 6 – Jason Crow has become a star in the Colorado Democratic delegation and has a safe seat.

District 7 – Ed Perlmutter is in a newly designed and somewhat competitive seat, especially if the Republicans can take advantage of what may be a good year. Perlmutter, a senior Democrat, has to decide if he wants to campaign for nearly half his votes outside of his home base in Jefferson County. If he does, he’s still likely to win it.

District 8 – The new open seat with a substantial Hispanic plurality, but very competitive in its partisanship. The candidates will need to blend ethnicities, the cultures of two counties, and urban and rural lifestyles. The Democratic primary will likely be wide open, as well as the Republican. The district is very blue collar working class, and both parties will have to carefully select their nominees.

Although the map favors incumbents because of national politics and local candidates and campaign quality, there could be surprises, and a 4-4 map with Republicans picking up the new seat is possible. Even a 5-3 map for the Republicans, depending if the 7th CD of Perlmutter is competitive. Of course, the Democrats could sweep it and take the 8th for a 5-3 map of their own to start the decade.

See:
KOA interview on redistricting
Bloomberg Government: GOP, Latinos Could Post Gains in New Colorado Districts Map (1)
The Buzz: Boebert and Buck Will Go Home to Old Districts. Is This a 4-4 Map?
The Buzz: New Map Incumbent Protection. Is This a 5-3 Map?
Posted by Floyd Ciruli at 4:11:00 PM

If you do a table with numbers, then all should be the same number of decimal places.
Or do decimal centering.
Sheer incompetence on your part Floyd.