A couple of weeks into the new Obama administration, there is a wave of polling data concerning foreign affairs.

• Afghanistan, which may be Obama’s most controversial initiative, has bipartisan support. Seventy-five percent of Republicans and 65 percent of Democrats approve sending 17,000 more troops. Further, Gallup reports that while a majority of the public believe things are going badly, a majority support keeping troops there “until the situation improves” (48%) or “more than two years” (12%).

• Finally, Obama started his tenure with a high approval, which continues. His 68 percent after inaugural day was among the highest approvals for a presidential start in recent history. The current 59 percent is more typical of presidents after a month, but still high. Republican approval is now at 27 percent, down from 41 percent (see Gallup poll).
Posted by Floyd Ciruli at 11:59:00 AM No comments:

Obama Moves Out of D.C.

Obama came to Denver to escape the politics of Washington, which was smothering his message in partisanship and 24/7 political commentary.

His first three weeks accomplished his policy mission – push the largest spending/tax bill in history in record time – but lost the public opinion competition due to distractions from failed cabinet appointments and Republicans’ well-coordinated talking points about pork in the stimulus bill.

Obama used his personal popularity to reframe the discussion in Florida, Indiana and Colorado where the economy and jobs are the not just an issue, but a personal crises (see Pew and Gallup polls). The stimulus was pork in Washington, but bacon to be brought home in Colorado.

In an impressive cameo appearance at the Colorado School Board Association annual legislative meeting, newly sworn Senator Michael Bennet said things will get worse before they improve. The tone of most Democrats on the economy is very negative. No doubt making some contribution to an 800 point drop in DOW since Obama’s inauguration. It’s clear that the 2010 campaign will be framed by the success of the stimulus plan (See PowerPoint slides from my presentation)
Posted by Floyd Ciruli at 3:40:00 PM No comments:

Not surprising, half the state’s voters (45%) are not familiar with newly appointed Michael Bennet. Recognizing his lack of name identification and having a desire to be identified as a Democratic moderate, Bennet instantly joined the Senate members who negotiated a compromise on the stimulus bill.

The poll shows Bennet ahead of several Republican candidates expressing some interest in running (McInnis, Tancredo) and one who has dropped out (Suthers). Former Governor Bill Owens beats Bennet by three points. But, Owens has not shown an interest in entering the race. 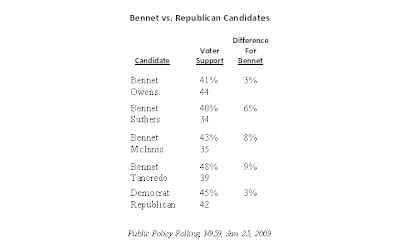 Before RTD can go to the public with another tax increase, the Colorado State Legislature must grant it permission (see Rocky Mountain News Speakout). The legislature can limit the tax below the four-tenths of a cent RTD appears to be advancing (doubling the increase of 2004). They can delay the tax election until RTD proves it can accomplish a part of the building program on time and within budget. They can also insist the agency improve its management structure.
Posted by Floyd Ciruli at 1:52:00 PM No comments:

Denver: The Country’s Number One City

It was a bit of a surprise to see Denver as the number one city to which Americans would like to move (see Pew poll).

A Pew poll conducted last October showed nearly half the people in the country would prefer a different city from the one where they currently live, and Denver was their top pick for a prospective move. Denver’s strengths are climate, recreational activities, friendly people and a good family environment.

Although Denver has long been a popular destination for transplants, this recent surge is no doubt due to last summer’s Democratic National Convention, raising the city’s visibility worldwide.
Posted by Floyd Ciruli at 1:48:00 PM No comments:

In the Democratic-leaning Denver metro area (about 55% of state voters), Ritter has an anemic 52 percent support, and his approval trails disapproval by 9 points in the rest of the state (see poll).

Both Bob Beauprez and Tom Tancredo, possible Republican candidates, lost in match-ups. Republicans must develop a stronger position on the economy. They dominate voters concerned about immigration, morals and family values, and taxes. Ritter commands large majorities with voters who cite health care or education as their top issue. But on the economy, which more than one-half of voters believe is the top issue, he beats the Republicans by 20 to 30 points.
Posted by Floyd Ciruli at 11:16:00 AM No comments:

Veteran political observer and columnist Lou Jacobson identifies Gov. Bill Ritter as one of eight Democratic governors that could be in for a difficult re-election (see Jacobson’s column).

Jacobson, who authors the “Out There” column on Stateline.org, places Gov. Ritter in Colorado and Gov. Bill Richardson in New Mexico as two western Democrats who could be in trouble if Republicans can find effective candidates. Richardson is embroiled in a federal probe of lobby irregularities that cost him his appointment as Commerce Secretary.

The open Wyoming governor election is Jacobson’s most vulnerable seat Democrats currently hold.
Posted by Floyd Ciruli at 10:27:00 AM No comments: