Colorado Follows California in the Politics of Marijuana

In 1996, California voters approved the medical use of marijuana (56% in favor). Four years later, Colorado (54% in favor) joined a growing group of states, mostly in the West, to legalize marijuana use for medical treatment.

Colorado now has the second highest number of “patients” (100,000) among states that have legalized it by either ballot elections or legislation. The state also has the fourth highest user rate of people admitting to recreational or medial use (9.24 users, or 370,000, compared to the adult population). 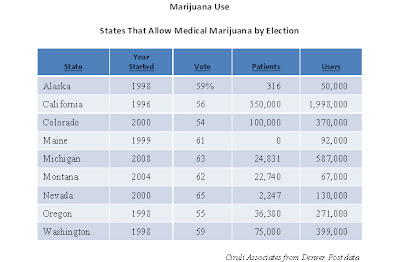 In this year’s election, 40 Colorado cities and counties are considering regulating or banning marijuana dispensaries based on recently passed state regulations. Several committees are asking voters to consider new taxes on marijuana sales.

California is now considering a ballot initiative legalizing marijuana for recreational use. A recent Field Poll shows that 50 percent of California voters favor legalization, dramatically up from 3 percent in 1969 and 30 percent in 1983.

The poll also showed nearly three-quarters of California voters (74%) support the 1996 initiative allowing medical use of marijuana, even though a majority (57%) believe the law has made it easier to obtain marijuana even without a real medical need. A near majority of California voters report smoking marijuana at least once in their lives and 8 percent admit to smoking it in the past year.

In 2006, Colorado voters defeated by 59 percent to 41 percent a constitutional amendment to legalize possession of one ounce or less of marijuana for adults 21 years old and older. But, medical use appears to increase acceptance of recreational marijuana use. And, if California legalizes pot, expect Colorado to follow suit and make another effort at legalization.

The Courts Being Pulled Into Politics

The Colorado midterm election will be a contest between the independence of the courts and the growing effort to pull the courts into the country’s current political polarization. Thus far, the courts have mostly escaped the high level of disapproval that has descended upon legislators, governors and the President.

A group of conservative activists has organized a campaign to vote “no” across the board on Colorado judges. The “Clear the Bench” organization has operated mostly without money to promote the idea that Colorado judges, especially on the Supreme Court, should not be retained due to their liberal rulings on tax matters.

Colorado is joined by Kansas and Iowa as a venue where appointed judges with retention elections are facing loud opposition. Although there will likely be an increase in anti-retention votes, the campaign, thus far, has gathered modest attention or little obvious support.

Courts generally are better thought of than other branches of government and, except for mostly rare, controversial cases, seldom generate vocal opposition or noisy demonstrations. A recent Gallup poll on the U.S. Supreme Court shows that its reputation is higher than the President’s or Congress’, but also subject to changing political trends. 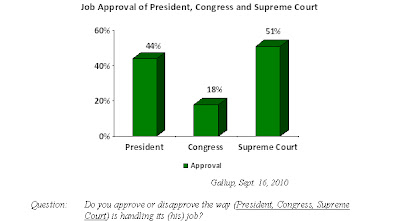 The Court’s recent high point in approval was earlier in 2009 when Democratic identified voter support surged after the election of President Barack Obama and appointment of Sonia Sotomayor. More recently, of course, Obama has loudly criticized the Court for its decision in the campaign funding case.

Its recent low point was in 2004 (42%), shortly after the ruling on condemnation of private land for economic development purposes.

Partisanship makes a difference. For example, comparing the 2009 to the 2006 data show dramatic shifts in approval of the Court by Democrats and Republicans. Republicans approved the G.W. Bush Supreme Court, but not the Obama Court; the reverse was true for Democrats. 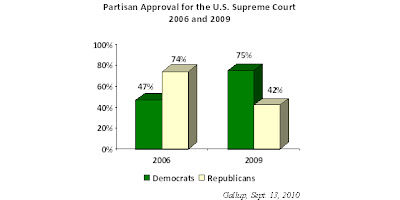 The Court is considered too liberal by about one-third of the public (32%) and too conservative by one-fifth (19%).  A plurality of Americans believe the Court has an “about right” ideology (43%).  An interesting finding since most observers believe the Court’s recent judicial philosophy has leaned conservative and will remain about the same with the new appointments – Sotomayor and Elena Kagan.
Posted by Floyd Ciruli at 12:40:00 PM No comments:

A New Definition of Conservative

The Tea Party movement has had much impact on the 2010 midterm election, and one of them has been to re-position the meaning of conservative. Congressman John Salazar, the threatened Democratic congressman from the Third Congressional District, is the clearest example of the danger to Democrats from the new definition.

Salazar, assumed as a Blue Dog, moderate Democrat who voted against cap and trade, he was sufficiently conservative to have the votes of substantial numbers of 3rd CD Republicans. He beat his current opponent by 80,000 when Scott Tipton first ran in 2006. National commentators agreed Salazar, who had more than $1 million in the bank, was not threatened.

But, the Tea Party didn’t care that Salazar only voted with Speaker Nancy Pelosi 92 percent of the time and not 96 percent like his urban and liberal Democratic colleagues. Voting with Pelosi at all made Salazar suspect, and 9 out of 10 voters was more than enough to campaign hard against him. “Salazar, Ciruli said, is ‘clearly a Democratic moderate’ who has been unable to connect with conservatives in his district so far this election cycle and seems to be paying the price.” (Grand Junction Sentinel).

Salazar missed the threat and didn’t’ really start a hard campaign until the end of August when he hired a couple of experienced campaign workers.

While it will be a surprise if Salazar loses, if there is a Republican wave strong enough to capture 70 or 80 seats, it might claim Salazar’s.
Posted by Floyd Ciruli at 2:45:00 PM No comments:

Garnett has tried to find some issues that don’t tend to highlight his liberal Boulder image. Initially, he, along with the Democratic position on health care (a position which, in fact, is opposed by a majority of Colorado voters), highlighted the death penalty, marijuana and gay rights, all polarizing issues, which he holds liberal-oriented positions.

More recently, he focused on conflicts related to Suthers’ fundraising (taking money from controversial financial institutions) and Suthers part in the release of a criminal informant who went on to commit several murders.

Unfortunately for Garnett, he is late in raising the issues and doesn’t have much money to highlight his attacks on television, especially in the onslaught of massive expenditures in the U.S. Senate race.

Also, most of the state’s newspaper editorial pages have the view Suthers has done a good job and deserves re-election. 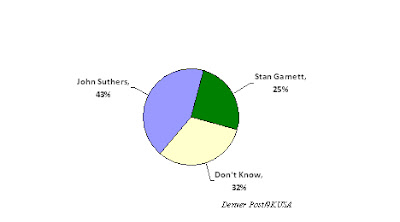 “I think John Suthers benefits in this particular situation by being a Republican incumbent in a good year for Republicans,” quoted in the Boulder Camera.  The latest national analysis of the race moved Suthers’ race from lean Republican to likely Republican win (Governing.com, Oct. 12, 2010).
Posted by Floyd Ciruli at 1:42:00 PM No comments: