Conservatives have overtaken self-identified moderates to become the largest ideological group in American politics. Two-fifths (40%) of the adult public identify themselves as conservative. Moderates are at 36 percent and liberals at 20 percent.

The number of independents describing themselves as conservative has increased the past year, from 29 percent in 2008 to 35 percent in October 2009 (see figure below). 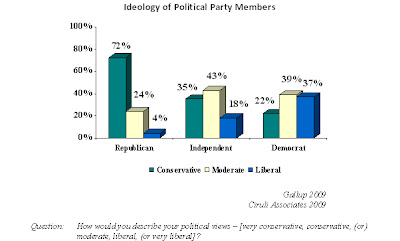 When the ideology of the two parties and independents is analyzed, Republicans remain the most conservative party (72%). Democrats are more closely divided between liberals (37%) and moderates (39%) with 22 percent conservative. 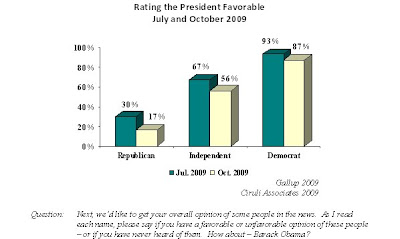 A series of Gallup polls released around the Nov. 4 election provides context for the election results, which show Republicans regaining the initiative.

Generic Ballot
One of the best predictors of national partisan preferences without the influence of personalities is the generic ballot test for the House of Representatives. After its poor showing in the November election, Democrats now trail Republicans in the test. 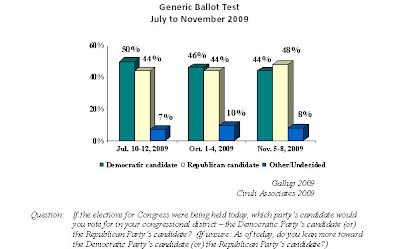 Because Republican turnout tends to be better in lower turnout mid-term elections, the Democratic spread on the generic ballot test needs to be wider if Democrats are to maintain their position or add seats.

History indicates that Republicans should pick up seats in 2010 as the party out of power, although, there were exceptions in 1998 and 2002 when Bill Clinton and George W. Bush defied history and gained seats in the House for their respective parties.

1994 and 2004 Blow-out Elections
The two great examples of anti-presidential party blow outs were 1994 when Republicans took control of the House after a four decade drought and 2006 when the Democrats came back.

The generic ballot shows Democrats well ahead during most of 2006, including the last poll in October. Democrats won 31 seats in November. In 1994, Republicans and Democrats were even in the October poll, and Republicans gained 53 seats.

The Democratic majority status is endangered. The Democrats picked up 31 seats in 2006 (they had a 7 point final generic ballot spread after the undecided voters were distributed). With a four point deficit as of early October 2009, Democrats could lose 39 seats in 2010 (218 seats are a majority; Democrats have 257 today), but current predictions indicate about 30 seats are at risk. 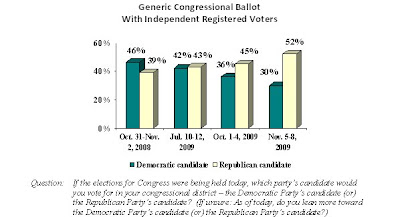 Although the Democratic Party probably won’t lose its Congressional House majority in 2010, a variety of polls appear to show a difficult House election for Democrats.

Current Congressional job approval is 21 points. It is below the Republican’s disastrous rating of 26 percent in late 2006, or the 23 percent Democrats had before they lost their majority in 1994.

The loss has major impact for a possible 2010 or 2011 regional sales tax increase for RTD. Ed Tauer, mayor of Aurora, engineered the library election as a finance strategy to help balance the city’s books. Tauer is the leading advocate for a RTD tax increase. Earlier this year, he advocated putting it on this November’s ballot.

The RTD tax was in trouble before this new dour election environment. The 2004 sales tax campaign over-promised and under-delivered by a factor of 100 percent. RTD now wants to double the 2004 tax increase.

RTD’s raison d’être has been significantly undermined by unusually aggressive columns in the Denver Post, questioning both the reason for mass transit expansion and RTD’s honesty and competence.

As I said in the Denver Post Nov. 5 election article by Jessica Fender, “The drama of the losses in terms of taxes is going to put tremendous chill on the forces who want to put something on the ballot – Even 2011 is in question.”

The Denver Post then editorialized on November 6 the loss “could mean significant trouble for large taxing districts and governments like RTD.” The new election environment compounds RTD’s already substantial problems.

Is this a Moment of Pragmatism?

The Republican victories on Nov. 4 were at least partially due to the candidates focusing on the economy and avoiding divisive social issues. Although a Republican candidate is stronger with an authentic relationship with Party’s core social constituencies, he is the most likely winner if he can focus primarily on the key issues, which today are economy and growth of government.

In Colorado, the Sept. 17 Tarrance Group poll showed Colorado voters are primarily concerned about the economy and jobs.

Are Republicans sufficiently hungry for victory after losing three straight elections that they will downplay candidates’ social history and concentrate on their fundraising process and fiscal conservatism?

If they can finesse the tension between social and economic issues, they can likely start winning again in Colorado.

In an NPR series previewing the 2010 elections, Colorado was highlighted as a likely battleground state.

Unaffiliated voters are the key. The state’s partisans are closely balanced. Unaffiliated voters can tip the state left or right. They represent a quarter of the electorate and a third of all registered voters. Because they are only weakly linked to the parties and more subject to the ebb and flow of media covered issues, if the national mood shifts, Colorado shifts.

I said that Obama and the national Democratic agenda was struggling with independent voters in Colorado compared to November 2008. A series of Colorado polls since July have shown Obama’s job performance approval below 50 percent.

Republicans appear to have reframed their message on the economy and government spending. It is a message more in alignment with unaffiliated voters’ concerns than the social issues that were salient earlier in the decade. Abortion, gay rights and illegal immigration are more polarizing and less on the public’s mind.

There were very few tax and bond initiatives on the 2009 November Colorado election because local governments and their consultants recognized that the economy would be a major detriment to passage and that few politicians and other civic leaders wanted to advocate tax increases.

And, of the few revenue measures that were on the ballot, there were high-profile losses, most importantly two of Colorado’s largest city lost tax increase efforts for what was described by the campaigners as critical to maintain libraries (Aurora) and police and fire personnel in Colorado Springs.

The national political mood didn’t help local tax advocates. Conservatives have been energized by the “too much, too fast, too expensive” talk show dialogue, and they were the dominant voting bloc in most of the low turnout elections.

There are some local government advocates and liberals who are in denial about the national mood. They believe the election was mostly positive. They cite the upstate New York congressional race and a few successful local bond and tax increases. But, the gubernatorial elections in New Jersey and Virginia and reams of polling data show 2008 is over and 2010 will be much tougher for raising taxes and Democrats.

(See Denver Post and 9News articles)
Posted by Floyd Ciruli at 11:35:00 AM No comments: