When the U.S. death toll from COVID-19 crossed 675,000 a week ago, the pandemic became the deadliest disease in American history, surpassing the 675,000 (estimate) deaths from the 1918-19 Spanish Flu. At approximately 2,000 fatalities per day, the total deaths (9-24-21) are now at 703,000. Peru is a new entrant on the top list. Given its tiny population, the ratio of fatalities to population (32 million) is three times the five larger countries. 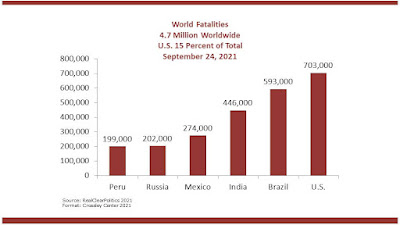 The slowdown in fatalities reported in May and June began to speed up with the arrival of the variants this summer. Beyond the devastation of peoples’ health, the impact on American politics and the economy have also been pronounced. Arguments have started in communities around the country concerning vaccinations, masks, passports and other health mandates. It has also damaged President Joe Biden’s approval rating, now down to 43 percent in Gallup with a 53 percent disapproval (46% in RealClearPolitics average). It has reduced his political capital with Congress and adds to the danger Democrats face maintaining their majority. Finally, the economy has stuttered while Democrats and others hoped the post-pandemic surge would be a smooth ascent.