Boebert and Buck Will Go Home to Old Districts. Is This a 4-4 Map? 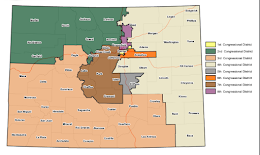 The new congressional map causes major consternation among incumbents Lauren Boebert and Ken Buck being placed outside their current districts. The map is likely to change given the extensive complaints from various counties and regional leaders. In this configuration, both candidates are likely to shift and run in their old districts. Boebert has no chance in the new 2nd, but will likely win in the reconfigured southern Colorado 3rd district. The average partisan performance is Republican by 5.5 percent. Pueblo and the San Louis Valley gave both her and Trump nearly half their votes in 2020. As blue collar, popular gun areas, she is likely to win again. Buck’s district favors Republicans by 15.6 percent – an easy win for him. 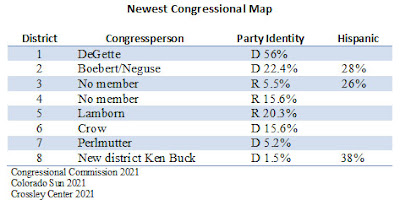 One question will be Ed Perlmutter in the 7th CD. Although the reconfigured district is better than the last version in that it gives him all of his home county, Jefferson, and pulls him out of hostile Douglas, its spread will require work. It still only has a 5.5 percent Democratic lean. Also, could a 12-year congressperson. who could well be in the House minority, be interested in fundraising and campaigning in Freemont, Park, Chaffee and other rural, small town counties in the district?

The new eighth district appears highly competitive with no real lean to speak of. In general, this map offers considerable competition and at least a chance for Republicans to add a seat, but now it has to get a majority vote of the Commission.