Some early numbers in the California recall of Governor Gavin Newsom have given Democrats a spark of optimism after a long summer of concern. A couple of late polls have been more positive and early ballot returns show a good Democratic start.

The political website, 538, tracks the latest polls and reports that Newsom now is up 4 points from just 2 points a couple of days ago. A YouGov poll of August 12 gave Newsom a 4 point advantage and a Change Research poll of August 25 claims he’s up 12 (after adjustment).

A debate among California election experts has been the projected ballot return with the assumption a lower return hurts Newsom. An off-year September special election with mostly low-key candidates, except for Newsom, could have a turnout as low as 30 percent. Twelve days into ballot returns with about 2 weeks left has attracted 16 percent, raising Democrats’ hope that their turnout efforts will work. 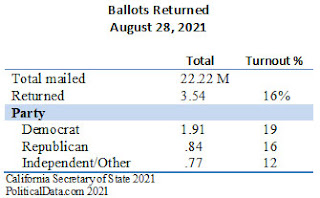 Of course, Republican voters may mail their ballots later or vote in-person. Beyond their inclination to not trust or like mail-back voting, their motivation may be to see which, if any, of the Republican candidates emerge. Also, the later they vote, the more it may leave the Democrats overconfident.

See:
Is Newsom in Trouble?
Recall Numbers are Moving. Summer of Discontent.
Posted by Floyd Ciruli at 10:19:00 AM