Immigration May Decide the Republican Nominee

The Republican debates have repeatedly highlighted candidate differences on immigration and the Paris attack placed Syrian refugees on the front page. The issue may decide who is the Republican nominee. The candidates are making clear there is little room for any nuance. This is partially a reflection of the public’s visceral reaction to the Paris massacre, but it also expresses the long-established Republican rank and file hostility to America’s immigration policy.

A poll in the last week shows a majority of Americans opposing accepting Syrian refugees, which corresponded to more than half the states’ governors stating they wouldn’t accept any. Their authority on the issue is not clear, but the politics is clearly controversial for most politicians and has a litmus test quality for Republicans. 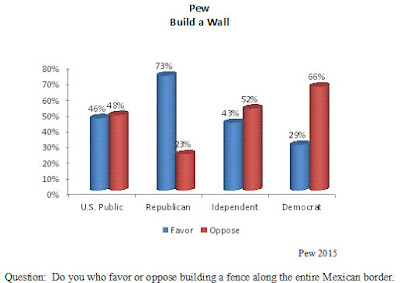 U.S. immigration policy’s linkage with terrorism may give Republicans an advantage with an issue that had considerable downside risk with both immigrant populations and more reasonable voters who can support a path to citizenship if accompanied with sufficient conditions.

Not since President George W. Bush in 2001 has the world heard the term “act of war” as frequently as it has since Friday’s Paris massacre. President Obama rejected the war terminology and banned it in his first year of office. The War on Terror became a criminal justice activity in America and a special ops strategy to attack specific terrorist cells and networks abroad. Further, the administration refuses to label various perpetrators of terror and the leaders of the ISIS Islamic terrorists.

Obama’s statement of sympathy after the attacks highlights his philosophy of a narrow engagement with ISIS. He made no reference to Islam and offered to support the French “bringing the terrorists to justice” and go after terrorist networks and help on investigations.

It appears his approach is being swept aside by the horrific events and leaders, both foreign and domestic, who intend on a more aggressive response to ISIS.
Posted by Floyd Ciruli at 12:38:00 PM No comments: 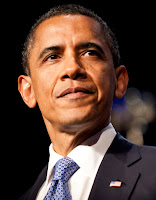 As Barack Obama’s presidency ends, his foreign policy accomplishments are becoming increasingly muddled. Events and politics are undermining his goal to reduce the American military involvement and depend on diplomacy. The Paris attack is just the latest and most serious blow. A quick scan of world hotspots highlights Obama’s problems.

Ukraine. Although a fragile cease fire is holding in Ukraine, mostly due to Russian interest in maintaining it, pressure is building from regional allies to step up NATO’s ability to counter Russia’s newly honed skill at disrupting neighbors with a so-called “hybrid war.” The long-term trend of reducing troops in Europe is now in reverse as men, war materials and exercises with NATO partners increase.

Although Obama has kept the U.S. out of arming Ukraine and provided only minimal assistance, pressure is building to do more. And while it is unlikely Obama will change policy, the next administration may. The momentum is for more action, not less. President Putin has shown himself as an effective opportunist. His military is getting stronger and his aggressive nationalism is playing well at home.

Asia. The administration pivoted to engage China where possible and counter it where needed. But China is a difficult power to manage. As the recent naval exchange in the South China Sea around China’s manmade islands make clear, America’s basic role in ensuring navigation and protecting allies is being threatened, and neither President Xi Jinping nor his military is likely to change the direction they are on. It will be a major challenge for the next administration.

Middle East. Obama was hoping his signature legacy would be the so-called rightsizing the U.S. commitment, especially removing military from Iraq and Afghanistan. It is in the Middle East that Obama’s preference to treat terrorism as a criminal problem and not a war was most visible. But events and politics are disrupting his approach in nearly every area:
Even before the Paris tragedy, the domestic criticism from Republicans and some Democrats is as heavy, if not as lethal, as the shooting in the field. As this scan indicates, Obama’s foreign policy goals are mostly under attack from foreign actors who do not share his or America’s goals and values and do not play by his rules. There have been some highlights and he has a few more goals, such as closing the Guantanamo facility, but he will be mostly playing defense the next twelve months.
Posted by Floyd Ciruli at 10:57:00 AM No comments:

Her steady performance in the two events won plaudits and the ending of Joe Biden’s shadow campaign extinguished the doubts that had come to overshadow the campaign from its April start through the summer and fall e-mail controversy.

Endorsements, many of whom are Democratic convention super delegates (Clinton claims more than 400 on road to 2,250 needed), and campaign contributions, which are now rolling into the campaign and her super PAC ($30 million in last reporting period; total through June - $98 million, $20 million in super PAC). Her polling position is well above half the Democratic Party voters nationally and she is now even with Bernie Sanders in New Hampshire, the only early state he had registered a lead.

Of course, Clinton still has an outstanding investigation, but that is hardly a new phenomenon for the Clintons. Republicans should not depend on it to derail her nomination. 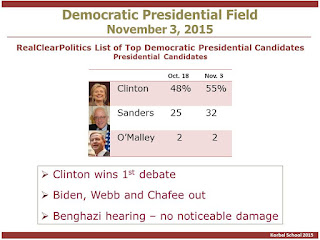 Challenge to Their Survival

Keith Coffman in a Reuters post-Colorado recall election story points out that the Jefferson County recall election involved a host of issues beyond just the Board’s perceived anti-union approach. Although the loss of union control in a well-off suburban school district was a “challenge to their survival,” I pointed out in that the large margin of the recall victory “showed there was wider discontent with the trio’s performance” (the school board’s conservative majority).

In an effort to reverse school reform (a word in some controversy) in Colorado, the national and local teachers union orchestrated a statewide counterattack on conservative board members and picked up seats in the Douglas County, Adams 12, Colorado Springs 11, Steamboat Springs, Mesa and Greeley. They took back control of Thompson School District in Loveland.
Posted by Floyd Ciruli at 2:01:00 PM No comments:

Republican Contest has Two Tiers, But No Resolution

Two very identifiable tiers have been established in the Republican nomination field: Donald Trump and Ben Carson in the lead, followed by Marco Rubio and Ted Cruz, both of whom benefited from their CNBC debate performances.

But Republicans, especially the very power establishment, remain unconvinced that Carson can either go the distance or has the depth to be the nominee, and Trump’s ad hoc campaign and lack of a predictable philosophy causes considerable anxiety.

Talk has begun that no candidate gets much more than 30 percent of the delegates, and there could be the feistiest brokered convention since 1948 and the Dewey nomination (3 ballots). 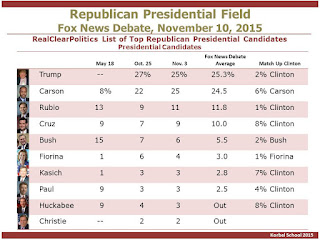 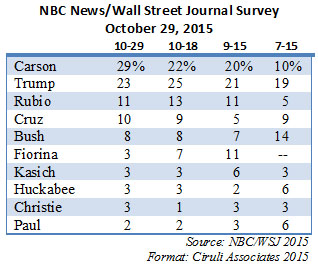 There were a few surprises in this election, but the Denver predictions made in my blog on September 3 held up (Denver Voters Face Five Major Issues in November: Prediction). I reported them on 9KUSA and 850 KOA Monday.

In my blog on October 30, 9KUSA: Balance of Power – Jeffco Recall Election, I predicted the pro recall forces would win. As I said on KOA, you expect proponents who go to all the effort to petition a recall and spend hundreds of thousands of dollars are going to have the advantage.

The conversation in Denver the last two weeks was that longtime political activist and school board president, Happy Haynes, was in trouble. Besides the controversy related to two jobs, people talked about the outsider advantage and made reference to the Chris Nevitt rule, that is, a surprise loss for the establishment candidate.