California Recall – Trending Toward the Governor

As I reported on September 1, polls and ballot returns showed Governor Newsom defeating the recall and the margins are building. Turnout is above 7 million, running two-to-one Democratic over Republican, and late polls now show a 13-point gap for Newsom.

On September 1, Newsom moved from a 2-point narrow lead to 4 points. According to the latest polls posted on the political website 538, Newsom now is up 13 points (see table below). 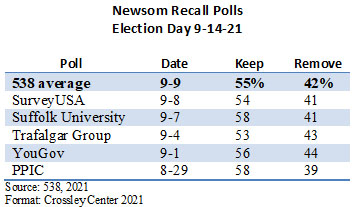 Turnout continues to grow slowly, and most Republicans will likely vote late or on Election Day, but Democrat turnout has produced a 28-point advantage – 53 percent to 25 percent. As debate on turnout continues, early estimates were 30 percent, which has now been surpassed. A high vote is assumed and polls confirm help Newsom. Could it hit 40 percent, 50 percent? 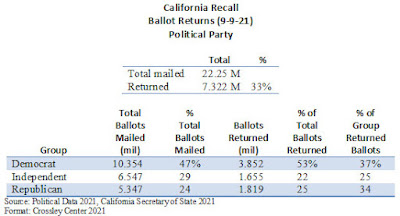 The Governor and Democratic Party campaign has emphasized the danger of downgrading health protections during the rise of the Delta variant and the extreme views of the Republican frontrunner and right-wing talk show host, Larry Elder.

Unless there is a Republican late vote, this could be a win by 10 points or more. But, there is still five days of ballot collection (California allows late mail to be counted). Polls give the advantage to Newsom and against the recall, but late votes and disaffected Democrats and unaffiliated voters could tighten the gap.