Since the story first appeared on the front page of the Denver Post, Colorado gubernatorial candidate Scott McInnis has had a defensive and inadequate response strategy. His statement that “this is a non-issue” was wishful thinking.

9News (7-13-10)
“Ciruli says the way McInnis handles the situation, especially over the next 24 hours, could have a major impact on his campaign.
‘It could end his campaign, frankly, I think it’s that serious,’ Ciruli said.”
It was clear from Tuesday morning on the story would derail the campaign if not managed.


9News (7-13-10)
“Ciruli says the front-page story in The Denver Post could impact the race for the Colorado governor’s mansion.
‘This is very, very big, at least for Scott McInnis. It changes the dynamics of his campaign,’ Ciruli said. ‘He is now on the defensive.’”
His cavalier treatment of the water report simply confirmed he felt he was providing something else for the money.


9News (7-13-10)
“9News Political Analyst Floyd Ciruli says the story does not look good for McInnis.
‘It was a strange story to start with several months ago because $300,000 for a few water stories just did not have a good value proposition. You couldn’t understand what was being paid for,’ Ciruli said. ‘So, it didn’t look good. But now, the fact that he apparently didn’t write the material, it looks dishonest.’”
For people like judges, teachers, lawyers, engineers and other professions who write a great deal, his behavior is inexplicable and embarrassing.

• McInnis will attempt to push ahead toward the August 10 primary. If he wins it, he will consider that confirmation that the issue was minor and is behind him. But, his winning may more be a function of the lesser evil rule – Republicans simply believe Dan Maes is an even worse candidate.

• The specter that scares Republicans is Bob Beauprez’s 17-point loss to the not very politically-talented Bill Ritter four years ago. 2010 was the year to win the governorship back. Polls indicate that Republicans, including with McInnis as the nominee, tend to have a 5-point advantage going into the race. Now, McInnis, even if he survives the primary, has picked up major baggage and turned the only statewide newspaper against him early and loudly.

• Obviously, Republicans want to contain the damage. They are currently ahead with either of their senate candidates and likely to win the state’s only competitive congressional race. They also have potential of winning the Colorado House. They do not want a poor campaign and damaged candidate running for governor hurting the whole ticket.

• John Hickenlooper is already attracting more money than McInnis, some of it from the same Republican metro area funders that McInnis was depending upon. If Maes wins the primary, or McInnis looks fatally damaged, expect a stampede of money to Hickenlooper.

• Although there is a mechanism for finding a stronger nominee if McInnis continues to be buried by the controversy, it would be very difficult maneuver to execute. McInnis would have to win the primary, then drop out of the race. It’s not clear what could motivate him to give up after, in his mind, he was just selected (forgiven) to be the nominee.

But even if it was possible, the public impact on swing voters, both unaffiliated voters and moderate Republicans, is not clear. It would look like a backroom political deal and hugely burden the new Republican nominee.

The latest polls show that the Republicans have the lead in key indictors as the midterm election comes in sight. That edge is without the public being enamored with the party or its congressional leadership.

President Obama and congressional Democrats appear to have lost the public opinion support that accompanied their majority of November 2008. At least partially it is a function of the slow American economic recovery. While voters can’t change the pace of the recovery, they can take out their frustrations on incumbent politicians, especially in Washington D.C. who are mostly Democrats.

But partially the Democratic collapse is of their own making. Liberal interest groups, House Democratic Committee Chairs, White House strategists (“let no crisis go to waste”) and media allies believed they had a much more resilient support base to push key liberal agenda items, such as the pork in the stimulus bill, the health care takeover and aggressive climate legislation.

By last July, a mere six months after the Obama inauguration, Obama’s approval ratings began to decline as the health care legislation became salient and its polarizing effect became clear.

The electoral evidence of this public opinion shift became clear as the Republicans won the November 2009 governors’ races in New Jersey and Virginia – states Obama won – and in the case of Virginia, a state seen as a building block in the Democrats’ new long-term majority.

The midterm election will be the next opportunity to view the voters’ judgment on the administration and desire for change. A recent Pew (7-1-10) and Washington Post national poll (7-11-10) shows the Democrats could lose their 40-seat House majority and five or more Senate seats.

• Republicans are more enthusiastic and more likely to vote.

• Confidence in President Obama’s decision-making has hit a new low and a majority disapproves of how he is handling the economy.

• President Obama’s approval rating is sinking toward the mid-40 percent range, undermining his ability to move the party base and possibly making him a negative factor with swing and independent voters.

• Congressional approval is at new lows.

• The public strongly believe the country is moving in the wrong direction.

• The shift away from Democrats is unaccompanied by increased affection for Republicans. Republicans just seem to be the beneficiaries of not being in office.
Posted by Floyd Ciruli at 12:11:00 PM No comments:

Buck tends to run slightly ahead of Norton in all the matches up, confirming that he maintains a lead going into the August 10 primary (see Denver Post poll).

Romanoff runs two or three points better than Bennet in the face-to-face offs.

Generally, the poll confirms about a 5-point Republican advantage going into the general election.
Posted by Floyd Ciruli at 3:40:00 PM No comments:

Democrats Could Lose the Colorado House

State House observers believe Democrats could lose control of the Colorado Assembly. A combination of an electorate leaning Republican due to national issues, a lame duck Democratic governor and a sharp turn to the left among legislative Democrats leave them vulnerable. After big Democratic wins in 2004 and 2006, they would have to lose six seats to lose control.

In the latest Denver Metro Chamber of Commerce legislative scorecard that was released on June 3, the Democratic Front Range delegation produced some of the most anti-business representatives, with Fort Collins Randy Fischer leading the way. 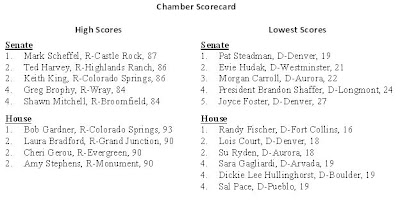 Randy Fischer is a good example of the Democrats’ problem. He is rated the delegation’s most anti-business member. Democrats improbably made him the chairman of the House Agriculture, Livestock and Natural Resources Committee. He is an urban legislator, an extreme environmentalist and strongly opposes farm water projects.

Most of the Democrats’ voting shifted to a more anti-business position this session, partially reflecting their sense that this may be the end of their domination of state government and their decision to balance the state budget by removing a number of business tax exemptions.

This clearly will be a tough year for Democrats to raise any business money in closely contested seats. Will organized labor and the wealthy liberal donors be able to save them?
Posted by Floyd Ciruli at 1:56:00 PM No comments:

Preliminary 2009 census data shows growth slowed on the California coast, but the Rocky Mountain West had a good decade, if a slow last year. Denver grew 10 percent as did Colorado Springs. Aurora had a 17 percent uptick from 2000 to 2009.


The decade saw two sharp recessions and 9/11. Much of the northeast declined – Chicago, Detroit, Cleveland and Buffalo continued to lose population. Growth slowed in Florida, and Texas took over as the nation’s boom state.

Denver is the now the nation’s 24 largest city and grew an astonishing 56,000 people since 2000, particularly a selection of attracting residents from the suburbs desirous of city amenities and tired of long commutes.
Posted by Floyd Ciruli at 11:38:00 AM No comments:

With the announcement of James Mejia, the Denver mayor’s race has begun. There are a number of candidates testing the water and raising funds. Current city council members Michael Hancock and Carol Boigon are often mentioned as are former candidate Penfield Tate (2003) and current State Senator Chris Romer. It is assumed the business community will try to unify behind a pro-business candidate.

Early List
Boigon
Finegan
Hancock
Mejia
Romer
Tate
Of course, the shape of the election depends on John Hickenlooper’s success in his gubernatorial run. If he wins, the seat would open up in early January 2011 at the latest. If not, some candidates might stay in the race and challenge the Mayor (assuming he stands for re-election).