Denver local government is in disarray. The unity between the Mayor’s Office and City Council has been disrupted and the leadership and authority of the government waned. It’s now every interest group and political personality for themselves and their own agendas. The results is a chaotic ballot, with 13 proposals ranging from major city bond initiatives, to City Council trying to take power from the mayor, to citizens fighting city initiatives and each other. Private land use disputes are also on the ballot. Even the lowly Denver Republicans see an opening and have a couple of the traditional limit government proposals.

The main city initiative is a $450 million five-part bond package. But even the normal city unity for bond proposals collapsed when several interests and councilpersons objected to the National Western $190 million arena. 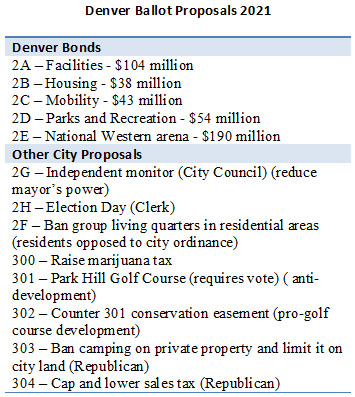