More than 500,000 Colorado voters have already returned ballots nine days before the March 3 primary and nearly half are Republican. Republicans have flooded early voting with 257,539 returns compared to 202,079 Democrats. Republicans tend to vote earlier in mail-back ballots and Democrats and unaffiliated (for the first time) later. Unaffiliated voters are being counted in with their preferred party. 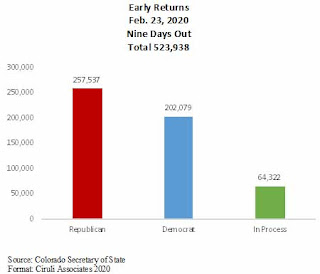 The 523,938 total as of Sunday is already a record for Colorado’s short eight-year experience with presidential primaries from 1992 to 2000.
The Republican primary turnout high was in the 1996 contest among five candidates, including Bob Dole, Pat Buchanan and Steve Forbes, when 246,339 voted. The Democratic high turnout was in the first event in 1992 when 234,287 voters made Jerry Brown the top candidate with 29 percent against Bill Clinton (27%) and Paul Tsongas (26%).
History is being made in this vote.
Posted by Floyd Ciruli at 12:33:00 PM