Is Bernie Sanders the George McGovern of 2020?

George McGovern’s loss in 1972 was historic. He carried one state and D.C. in the reelection contest against Richard Nixon.

There are some similarities of that loss with today. Democrats had reformed the party rules after the 1968 convention debacle, pushing out much of the establishment-elected officials, such as mayors, governors and labor leaders, making the nomination of McGovern more possible. The Party’s passion was driven by its anti-war left and newly enfranchised 18 years olds. They were the voters McGovernites claimed would defeat Nixon.

The 2020 Democratic rules were changed due to Bernie Sanders’s complaints. His base is supporters under 35 years old and he advocates revolutionary change. His program and rhetoric are clearly popular with at least a quarter of the party, but even with Elizabeth Warren’s supporters, less than 40 percent endorsed it in the first two events. A majority voted for other candidates and want primarily to remove Donald Trump.

Republicans are pulling for Sanders because they believe the “socialist” label will be a gift for attack advertising and a death sentence with Middle America. And, the latest Gallup report appears to confirm that “socialist” of all the candidates’ characteristic they tested is the least favorite shared by a majority of voters. 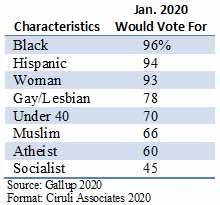 Question wording: “Between now and the 2020 political conventions, there will be discussion about the qualifications of presidential candidates – their education, age, religion, race and so on. If your party nominated a generally well-qualified person for president who happened to be [characteristic], would you vote for that person?”

Although 76 percent of Democrats said they’d vote for a socialist, only 17 percent of Republicans, and most importantly, less than half of independents (45%) would. The “socialist” label will likely be a major vulnerability in battleground states.
Posted by Floyd Ciruli at 1:09:00 PM