At State of the Union, Trump Bets on the Economy. Is it Enough? – PBS Releases Poll

At the recent State of the Union, POTUS 45 dropped much of the dark carnage imagery of previous addresses and went “optimistic,” at least for him. “The Great American Comeback” mostly focused on the economy. In an online analysis, PBS’s Gretchen Frazee, the deputy digital NewsHour editor, interviewed a group of pollsters and political scientists on Trump’s strategy of riding the economy to reelection.

I argued that a booming economy normally gives an incumbent an advantage. It was pointed out that he has not gotten full benefit due to his personal style and the chaos that tends to surround him. 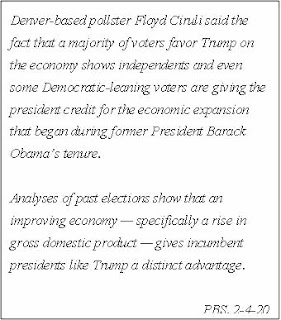