In spite of nearly saturation news coverage since September, impeachment hasn’t changed Americans’ views of President Trump. He still has his base (45%), with the same slightly over half of Americans (53%) who disapprove of him. Impeachment appears likely to just be another issue with voters that have already decided their position on Trump.

But, impeachment may be a bigger problem for vulnerable senate candidates. Susan Collins (ME) thought so and voted in favor of witnesses (49 to 51), but others, such as Cory Gardner (CO), Martha McSally (AZ), voted with Mitch McConnell and the Republican leadership to end the process without witnesses. McConnell is considerably less popular than Trump and the vulnerable senators are in states that Trump barely carried or lost.

For senate candidates, the impeachment votes are high-profile defense of Trump’s least admirable behavior. Specifically, the vote against witnesses defied two-thirds of Americans who thought a fair trial required witnesses. And, of course, next fall Trump may do something that reminds voters of his Republican-engineered escape from accountability. 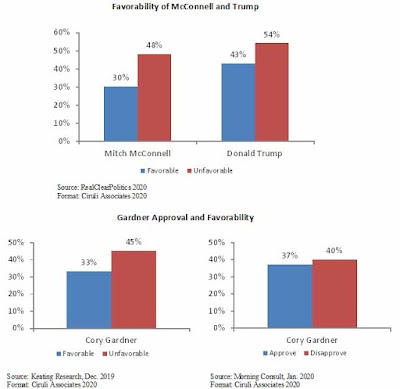