Eight Left on Valentine’s Day. How Many Make March 3?

The list of Democratic dropouts is long (18) and grew by three within hours of the New Hampshire primary results.

Actual election results have a way of instilling reality into the most wildly optimistic and aggressive vanity campaigns. The lack of measurable polling support can be rationalized away with various longshot theories and the lack of funds is less severe for the millionaires and online fundraising experts, but few votes and no delegates end the show. The media packs up, the staff moves on, and in the case of Michael Bennet, you start to worry about the judgement of Colorado voters who just got their March 3 ballots. 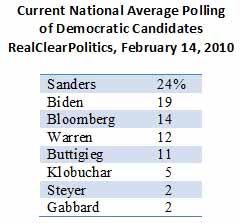 There are at least two candidates who are unlikely to gather much support beyond the 1 or 2 percent they currently have. Tom Steyer is proving that money alone does not buy the nomination. Tulsi Gabbard has a miniscule support base and is mostly being ignored, except online.

Will Joe Biden and Elizabeth Warren, both of whom have lost more than a third of their support (10 points) in a few weeks, make it until March 3? As of today, Michael Bloomberg may be the frontrunner to take on Bernie Sanders. But, the continued muddle is making a fight all the way to the convention likely.
Posted by Floyd Ciruli at 1:48:00 PM