Tuesday, February 11, Bernie Sanders won the New Hampshire primary by 2 points – closer than expected. But more significantly, nine days after the results of the Iowa caucus, in which he also ran neck-and-neck with Pete Buttigieg, Sanders became the new national polling leader, ahead of Joe Biden by 3 points. Michael Bloomberg is now in third, ahead of a fading Elizabeth Warren and not yet national campaigners, Buttigieg and Amy Klobuchar. 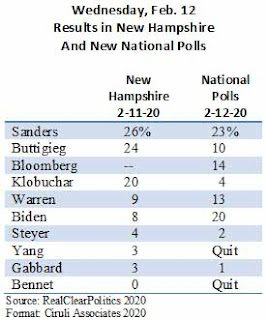 As predicted, Michael Bennet finally dropped out, receiving less than a 1,000 votes out of nearly 300,000 cast and as Colorado Democrats started to vote. Some post New Hampshire observations:


Read The Buzz:
Bennet’s Last Day
Why is Michael Bennet in New Hampshire?
Posted by Floyd Ciruli at 3:50:00 PM