Sanders in the Lead

Bernie Sanders is in a strong position for Super Tuesday – the 14-state March 3 event – with 34 percent of the pledged delegates at stake (1,357). Historically, the winners of 17 out of the last 18 Super Tuesdays from 1984 to 2016 won the nomination.

After the Nevada caucus (47%), he is the delegate frontrunner with 45. Polls show him ahead in the two most delegate-rich Super Tuesday states – California and Texas. He is up 13 points in California (415 delegates) and 1 point in Texas (228), which represent nearly half the delegates (47%). Sanders is also ahead in North Carolina (110) by one point and 6 points in Virginia (99), the next two largest states. 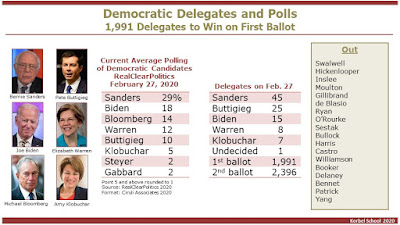 A new poll in Colorado shows what most people have long assumed – Sanders is the frontrunner for delegates with 27 percent of the vote, 12 points ahead of Elizabeth Warren in second.

At the conclusion of Super Tuesday, he may still only be the plurality leader in delegates, but it is likely to be at least a third of the total delegates, or more than 500 of the 1,991 needed for nomination.

Many of the state polls have been volatile in the last few days and the spreads are narrow. Sanders’s potential wins will depend on his base turning out, the effectiveness of the efforts of other candidates, and the nascent “stop Bernie” movement gaining traction.
Posted by Floyd Ciruli at 3:46:00 PM