A huge wave of publicity has engulfed the Democrats. After two nomination events with only 0.3 percent of the delegates needed for the Democratic nomination, the pundits are beginning to declare the contest over. 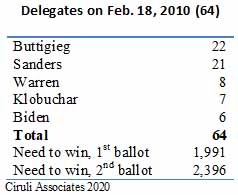 The impact of the Iowa caucuses and New Hampshire primary have been well documented, but it’s still impressive to observe, especially since the Democratic Party’s goal has been to winnow the candidates through debates (another Feb. 19) and early events, and there are still seven in the field, not counting Michael Bloomberg who won’t enter until March 3.

Nevada’s (36) and South Carolina’s (54) 90 delegates will add slightly to the total (155), but the main events don’t begin until Tuesday, March 3, from Maine to Texas, to California to North Carolina, when 1,357 delegates are selected, or nearly 30 percent of the total convention-pledged delegation

Will Colorado Have Record Turnout?

Colorado’s modest 67 delegates could attract 500,000 mail-back ballots from Democratic and unaffiliated voters. Turnout in Iowa and New Hampshire has not been exceptional – will Colorado set a record?
Posted by Floyd Ciruli at 9:24:00 AM