Sanders has a Quarter of the Democratic Party, After That, It’s a Fight in New Hampshire

The final New Hampshire polls – tracking and late polls out of the field on Monday – show Bernie Sanders somewhere between 25 percent and 29 percent. He ended with 26 percent in Iowa. But, the race’s volatility has settled on second and third place. Pete Buttigieg, gaining advantage from his Iowa tie with Sanders, is currently in second. But a large bloc of late and weak deciders are moving toward Amy Klobuchar. She’s benefitting from her debate performance and is now ahead of Elizabeth Warren and Joe Biden in third place. 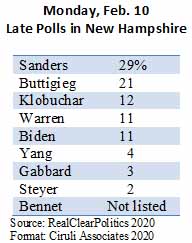 What is clear is that the first two events will leave a muddled result with a flawed frontrunner, Sanders, and a field of four likely to stay in the race to Super Tuesday, March 3. In addition, Michael Bloomberg is now in fourth place nationally. He could become the alternative to Sanders by Super Tuesday. Stay tuned.