Do Democrats Want Revolution or Relief?

The Iowa caucus results confirm that the party remains divided between its heart that wants a candidate who represents them on the issues, and their mind, which wants a candidate who will win the election – idealism or pragmatism, revolution or get rid of Donald Trump? Of course, they would prefer a nominee who satisfies both desires, but given many of the party’s purest issue positions, some of which are outside the mainstream, they will likely have to choose. 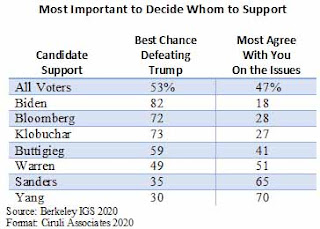