Colorado’s Presidential Primary Heading to One Million Plus

More than 850,000 Colorado voters have already returned ballots five days before the March 3 primary. More than 250,000 unaffiliated have voted, casting their ballots nearly two-to-one in the Democratic primary. More than 1.3 million voters are possible. In the 2018 gubernatorial primary, 1.1 million turned out. Democrats, who often vote late, have low turnout as of Thursday, February 27. 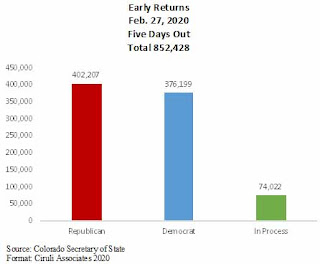 The 852,428 total, as of Thursday, is twice the previous number of voters in Colorado’s eight-year experience with presidential primaries from 1992 to 2000.