After one more debate and two more preliminary events, 14 states, one territory and a group of Democrats abroad will weigh in on Super Tuesday with 1,357 delegates, or more than 8 times the first four caucuses and primaries. 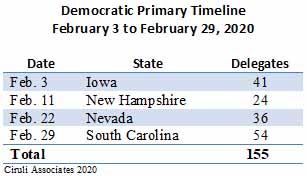 Thus far, Bernie Sanders and Pete Buttigieg – the frontrunners in votes and delegates – have been attracting about a quarter of the votes, which has translated into a third of the delegates. Unless the field clears soon, Sanders, who has a national base of previous supporters and young people, will collect around 1,400 delegates, but needs 1,991 to win in the first round at the convention. 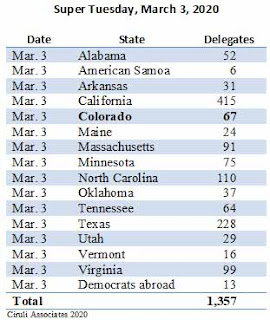 If the convention goes to a second round, 771 super delegates – mostly appointed elected officials and party leaders – will be allowed to vote. They will be inclined to try to balance the issue and candidate passion of the primary voters with the goal of winning the general election, especially in swing states. That will be an interesting process to watch.

Since the last contested Democratic convention in 1952, the party has shifted most of its discretion and deliberation to the caucus and primary voter. To attempt to shift it back to the delegates in a deliberative process will be a major change and no doubt be accompanied by a major war on the floor of the convention.
Posted by Floyd Ciruli at 4:26:00 PM