Bennet and Udall: A Year Before the Election

Although Senator Michael Bennet is currently enjoying an opponent-free summer, the Colorado election environment continues to suggest the races next year will be closely fought.

Senate races have become more tied to presidential races, and Hillary Clinton’s latest national and local polls have had bad news in favorability, trust and head-to-head tests (The Buzz: Clinton in Trouble in Colorado – 9-KUSA).

When examining former Senator Mark Udall’s approval and re-election numbers 14 months out to Bennet’s, it’s clear that Bennet, even without a Republican challenger, faces an unfriendly political environment. Compared to Udall, he has 6 points less approval; he’s below the President’s (45% national). And, he is underwater in his re-election numbers: 40 percent say “don’t re-elect” to 32 percent “re-elect.” Again, he compares poorly to Udall, who was 8 points up in the summer before the election. Of course, Udall lost by 2 points in November 2014. 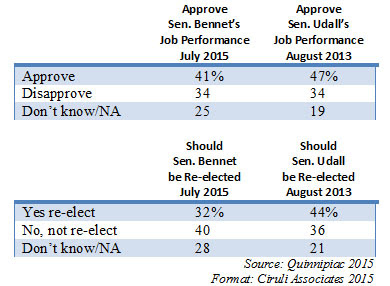