McConnell Comes to Denver Looking for a Senate Candidate

Rumor has it, U.S. Senate Majority Leader Mitch McConnell was in Denver recently, no doubt, trying to recruit a Republican candidate who could help save his job. As of today, it is assumed Republicans will lose some seats of their Senate majority. If Democrats win four seats and the presidency, Chuck Schumer, could be the new majority leader (they need 5 seats if they don’t win presidency).

There are only two seats the Republicans believe they have a chance to win: Harry Reid’s open Nevada seat and Michael Bennet’s. 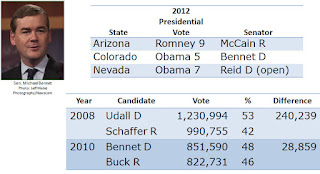 Bennet appears well-positioned to survive his 2016 re-election. Turnout will be up, and President Obama won the state twice in 2008 and 2012 with a healthy majority. In the 2008 election, recently defeated Mark Udall won with a 240,000 vote difference, slightly larger than Obama’s win over Senator John McCain.

Bennet is a prodigious fundraiser and ran a vigorous, technically smart campaign to hang onto a 29,000 vote victory in the 2010 Republican off-year election sweep (Republicans retook the House, but missed the Senate mostly due to fringe candidates).

But Bennet does have two problems that are likely to put Colorado in play if Republicans can find a candidate.

Senate races are closely tied to presidential contests, and Hillary Clinton looks very vulnerable today, especially in Colorado. And secondly, the Trump factor. Substantial swaths of the electorate are passionately unhappy with Washington and its political class. And Senator Bennet, for all his effort to localize his race and offer reaching across the isle rhetoric and solutions, is a leading member of the D.C. establishment.
Posted by Floyd Ciruli at 3:04:00 PM