Colorado has been an important state in recent presidential contests, but not had much influence in the nomination contests. In the Democrats’ last contest, Barack Obama’s caucus strategy worked in Colorado, but among Republicans, the state’s timing, size and choice hadn’t had much impact. 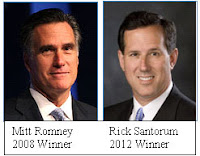 Mitt Romney won the caucus in 2008, but ran second to eventual winner, John McCain. Rick Santorum came in a close first-place over Mitt Romney in 2012. Santorum dropped out in early April to frontrunner Romney.