Donald Trump has a general theory that is propelling his candidacy. America is being beaten at the negotiating table from China to Mexico to Iran. He’s a successful businessman and negotiator and the politicians in Washington are dummies and pinheads. The American people think he’s right. In general, politicians in Washington are not considered smart. 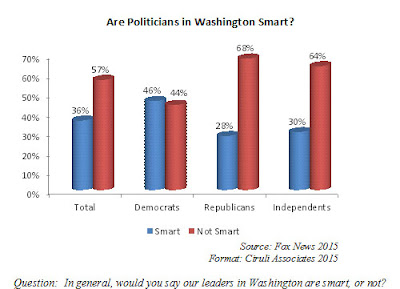 Most people don’t have trouble answering the question. They don’t believe (57%) “leaders in Washington” are smart. Even Democrats are divided on the issue, with nearly as many believing D.C. politicians are not smart (46%) vs. smart (44%).