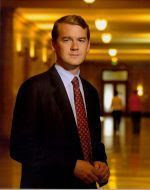 The Hill newspaper’s Whip List has twelve Democrats identified as undecided on the Iran nuclear agreement as of August 26. Senator Michael Bennet is one of them.

The Senate has until September 17 to vote on the agreement. President Obama, from his summer retreat on the Vineyard, worked hard to rally support for the agreement. He assumes the vote will go against the treaty with a unanimous Republican bloc, so he needs thirteen Democrats to sustain his veto. Only two Democratic senators have declared opposition. 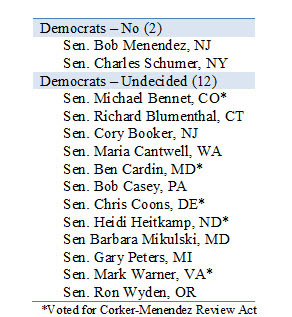 Fifty-four Republicans are declared against the agreement (41) or leaning against (13), including Senator Cory Gardner, a definite opponent.

As one looks down the Democratic list of twelve undecided, it is difficult to identify many other “no” votes to join Schumer and Menendez. There are many Democratic leaders or dependable liberals. Hence, it is unlikely a veto will be overridden. It is also unlikely Bennet will join a futile cause. Senator Chris Coons, a possible “no” vote, claims he thinks there could be three more in the group.

Bennet voted for the Corker-Menendez bill, which set up the review process, and was opposed by liberals, such as Move-on and DailyKos.

Republicans have a threshold to meet to even the vote on the agreement. They must find six Democrats to join them to get to a 60-vote closure. It was assumed they can find those votes, although they don’t as of yet have six Democratic votes. Obama and Minority Leader Harry Reid are fighting to shut down the debate with the filibuster rule.