Debates Can Change the Contour of a Race

Debates can move polls. In 2012, Newt Gingrich probably won the South Carolina primary on his
debate performance just before the event. But, that was unusual. There were 20 debates in 2012, and most were forgettable.

The Fox News debate may be in the exceptional category. Twenty-four million people watched it – a cable record. It will test some wild behavior (Trump), allow some candidates to be discovered (Fiorina) and shift the media conversation as Labor Day passes and the next debate looms (Sept. 16, CNN). 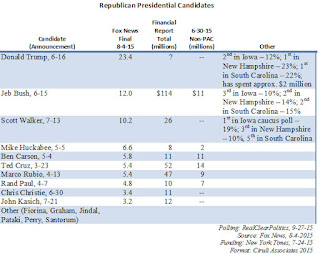 In an online overnight poll from Friday evening to Saturday using SurveyMonkey participants, Donald Trump was still the frontrunner with 23 percent of the respondents. Carly Fiorina came in fourth with 8 percent, a huge jump up, and she was declared the debate winner by 22 percent.
Posted by Floyd Ciruli at 9:48:00 AM