It has been five months of political pummeling, starting when Hillary Clinton first addressed the e-mail controversy at the UN press conference on March 10 until August 11 when she turned over her personal e-mail server and thumb drives with copies of e-mails. 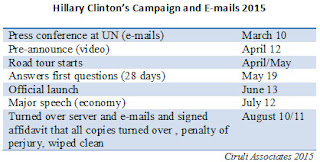 Clinton has been in response mode for weeks, and the problem became even more aggravated on August 18 at a press conference when asked about servers being wiped clean, she said “with a cloth or something?” in a flippant attempt to highlight her lack of knowledge of servers and removing data.