Vice President Joe Biden has many handicaps in a race for the Democratic nomination against Hillary Clinton (see The Buzz: Biden for President Only if Clinton Catches on Fire, July 23), but the primary argument in his favor is electability. If the Clinton e-mail slide continues, is Biden the Democrats only safe choice?

Being the vice president is Biden’s major asset, but unfortunately, it is also his major handicap. As most observers have pointed out, extending a party’s control of the White House beyond two presidential terms has been historically difficult (Eisenhower, Kennedy/Johnson, Nixon/Ford, Clinton; an exception, Reagan/Bush).

Confirming that observation, but not overwhelmingly, is the latest Fox News poll that shows that a majority of the public believes it would be a “bad thing” for the country to continue Barack Obama’s policies. 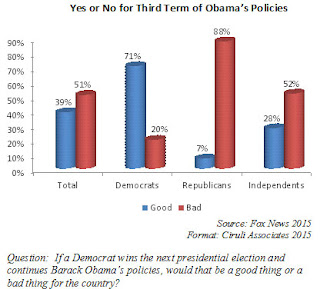 Democrats and Republicans are polarized on the issue, although 20 percent of Democrats are ready for a change as are 52 percent of independents.
Posted by Floyd Ciruli at 3:45:00 PM