The Republican Debate – Waiting for Results

Polls and physical positioning (also decided by the polls) provided the framework of the Fox News debate because they selected the top ten candidates and then lined them up on the stage. The average from the first few post-debate polls will shake up the top ten. 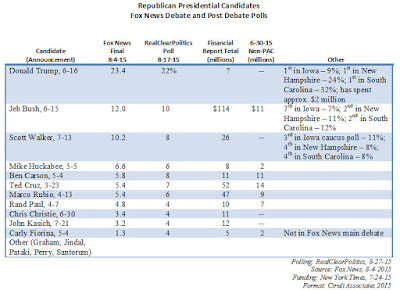 There tends to be four stages of candidates, their handlers and the pundits’ effecting public opinion related to debates: managing expectations, spin room reaction, the early commentary and the secondary analyses.

Managing expectations: Pundits and pollsters weigh in with who they believe are the best debaters and best-positioned candidates. Candidates tend to claim they aren’t as good as or as practiced as their opponents. For this debate, Donald Trump claimed he wasn’t a good debater and he wasn’t preparing.

Spin room reaction: The post-debate instant analysis identifies some key moments and winners and losers. In the Fox News debate, the small amount of candidate interaction, such as the Rand Paul and Chris Christie exchange on privacy and security, was dissected repeatedly. But moderators’ questioning dominated this debate with a focus on candidate controversies and weaknesses. Marco Rubio and John Kasich were seen as early winners, with Carly Fiorina emerging from the undercard debate. Also, Trump dominated this session with his controversial answers to questions related to party loyalty, attitude toward women and business bankruptcy.

Early commentary: While the early commentary, namely all day Friday and Saturday, tried to look at the full debate and have some reaction for each of the candidates, Trump’s attack on Fox News’ debate performance and specifically Megyn Kelly completely dominated the first wave of analyses with mostly shock at his crude statements and then rounds of speculation as to his survival, tempered with recall of his plowing through previous controversies with little effect.

Secondary analyses: The final wave of analyses is usually the Sunday morning talk shows, which dissect the debate and post-debate events and wait for any early polling results as to what the public verdict is. The snap early polls and those done a week or so later after the public can savor both details and the impact of Trump’s confrontation with Fox News and the Republican establishment will be examined for their auspice.