A new poll shows two-thirds (67% Quinnipiac) of Colorado voters support the death penalty, whereas nationally, public support has declined from recent high levels to barely over half (56% Pew) today. Coloradans’ opinion may have been affected by the James Holmes mass murder trial, which has been ongoing for months and his conviction was announced while the poll was in the field. In a specific question concerning Holmes, 63 percent of Coloradans said he should get the death penalty. 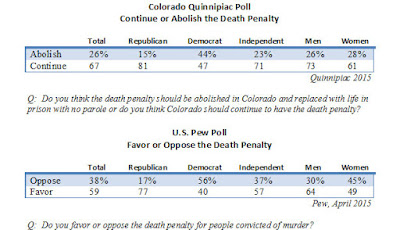 The Associated Press ran a long story on the fact that even with the death penalty, few convicted Colorado murderers are sentenced to death, and even when sentenced, almost none are executed.


The sparseness of Colorado’s death-row population is not necessarily due to lack of support for capital punishment. Nonpartisan Denver Pollster Floyd Ciruli says support for the death penalty in Colorado polls has generally tracked those in national ones for decades. In 2013, a Quinnipiac University Poll indicated that 69 percent of Colorado voters backed capital punishment. (AP, July 21, 2015)

Pew Research points out the major shift from 62 percent favoring the death penalty in 2011 to only 56 percent today was among Democrats, who shifted 13 points against, and women, who moved from 33 percent against to 45 percent today, or 12 percent. Although there are significant differences in the Colorado poll between Democrats and Republicans and men and women, all four groups support continuing the death penalty, albeit in the case of Democrats, by only 4 points.
Posted by Floyd Ciruli at 12:23:00 PM