Secretary John Kerry will travel to Cuba on August 14 to open the U.S. Embassy. Cubans raised their flag over a re-opened embassy in Washington, D.C., July 20 (Embassy Opens and Obama Wants to Travel, 7-7).

On July 21, Hillary Clinton called on Congress to end the trade embargo in effect since 1962. Clinton believes she will find majority support, even among the Cuban-American community. Recent U.S. polls show the trend is indeed in favor of rapprochement, including an end to the embargo. A new Pew Research poll shows a 10-point increase in support for President Obama reestablishing diplomatic ties with Cuba and a 6-point increase to 72 percent to end the trade embargo since January of this year. 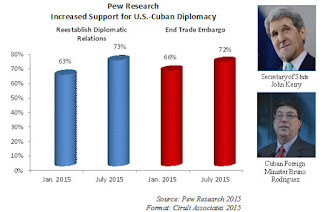 Although leading Republican presidential candidates are opposing the new policy and are competing in the Florida primary on March 15, in terms of the general election, Democrats are hopeful Cuban-American opinion is shifting sufficiently to help them win Florida.

And, indeed, two new Florida polls show that Cuban-American opinion is moving toward diplomatic solutions and against embargos due to the increased number of Cubans born in America (not Cuba) and new arrivals since the relaxation of immigration rules in the last decade. 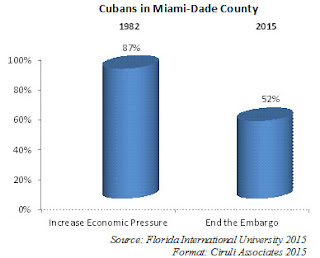 See:
NPR: Republicans stand against Cuba change despite public opinion shift
AP: Clinton: End Cuba embargo ‘once and for all’
Posted by Floyd Ciruli at 9:33:00 AM