Since the launch of the Ukraine War, President Putin has used the threat of nuclear weapons to attempt to limit U.S. and NATO help for Ukraine. President Biden has offered repeated assurances that he is avoiding commitment of American troops or combat with Russia. However, many NATO countries and the U.S. are providing significant funding and weapons. The recent amount of U.S. and NATO help for Ukraine ($800 million in the latest tranche from the U.S.) has produced a new threat from Putin of “unpredictable consequences.” Also, two nations – Finland and Sweden that have been outside of NATO – are allowing a debate about joining. Putin immediately threatened, including moving nuclear weapons near them.

The West has been testing Russian tolerance. Putin’s next step may be attacking the roads and railways that still move refugees out of the country and materials in. Will that produce a Western response? War with direct combat with the West is possible as the Russian war effort remains stalled and the West is perceived as the main cause of the difficulty.

Are Americans ready for war? Polls have repeatedly showed that Americans do not want U.S. soldiers in combat. Only 25 percent support sending U.S. troops. However, they have been overwhelmingly in favor of supplying weapons (72%), sanctions (78%) and sending troops to NATO allies (63%). 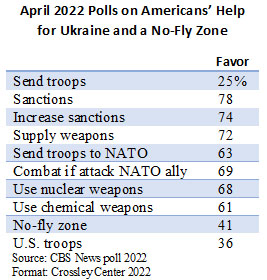 They also have been clear that some Russian behavior could justify direct combat, such as attacking a NATO ally (69%), using nuclear (68%) or chemical weapons (61%). And in general, the criticism of Biden’s performance in the war leans toward the U.S. should do more. For example, 74 percent believe sanctions on Russia should be increased (data from an April 2022 CBS News poll).

Polling on creating a no-fly zone is difficult because explaining what it entails and the risks of confrontation associated with it make questions complex and hypothetical. But, in questions by the Chicago Council on Global Affairs (March 25-28, 2022), it appeared that voters are not at this time supportive of a no-fly zone over Ukraine that might trigger combat (41% support) or sending U.S. troops to Ukraine to help defend it (36% support).

Today, under present circumstances, Americans are not ready for combat with Russia.