Democrats Now Predicted to Lose the House and Senate

It is nearly universally believed that the Democrats will lose the House of Representatives. The only debate focuses on the size of the new Republican majority – ten or less or 40 or more as in the great shellackings of 1994, 2010 and 2018. But, the latest assessment on Senate seats from several sources see Republicans with a distinct advantage to also win the Senate. The map below is Larry Sabato’s latest (3-1-12) Crystal Ball posting, which describes Democrats with 47 seats, Republicans with 49 (counting those likely, lean, safe or not up by the respective parties). 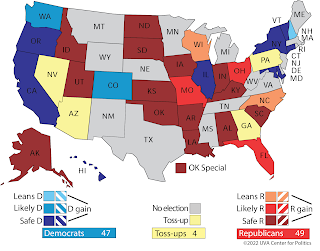 Unfortunately for the Democrats, the analysts believe the four toss-ups lean Republican in spite of having three Democratic incumbents, with two in the West – Arizona (Mark Kelly) and Nevada (Catherine Cortez Masto) – and one in the South – Georgia (Raphael Warnock). It cites the problems of the normal anti-first term tide, the economy (inflation), Biden’s especially heavy drag, and in all three states, some form of cultural issue – which Democrats haven’t found an adequate response – immigration, crime and parental school involvement (race, gender).

See Center for Politics: Notes on the State of the Senate