The presidential polls in France continue to predict a close Emmanuel Macron reelection. The impact of Macron-Marine Le Pen debate will be added to the factors affecting the final vote on Sunday, April 24, but polls the last week have improved Macron’s position. Several post-debate polls gave him the edge in their exchange. 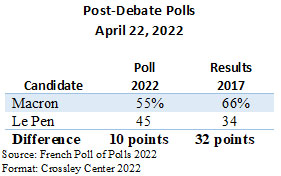 Among Le Pen’s nationalist fellow travelers in the Kremlin and Washington, D.C., her hostile views on the EU and NATO are applauded. However, the position was more popular before President Putin’s invasion of Ukraine. A decision by French voters to put Le Pen in the Élysée Palace would be a massive shock to the international system and France’s position in it akin to Brexit (2016 referendum) for Great Britain or Donald Trump (2016 election) for the U.S.

In recent years, the EU was not popular with the French. Gallup reports that only 37 percent of French adults approved of EU leadership in 2017, but today, that has increased to 48 percent. The French, ever independent, are still closely divided, with 45 percent today disapproving of EU leadership.

The decision by the French voters will be important for the entire Western alliance.

Read The Buzz: French Pollsters Get It Right