The mail-in system, approved by the legislature in 2012 and operating since, is considered a model system around the country for providing voter access, high turnout, fast reporting and election integrity. But since the 2020 election, Colorado Republican activists have criticized it and just nominated candidates for Secretary of State and U.S. Senate who are celebrity opponents.

The system is highly favored by voters. Two Colorado polls in the last presidential election showed the system has strong majority support. In a Crossley Center for Public Opinion Research poll, 57 percent of voters “strongly approve” the mail-back option and with 25 percent offering “somewhat approve.” Only 10 percent “strongly disapprove” of it. 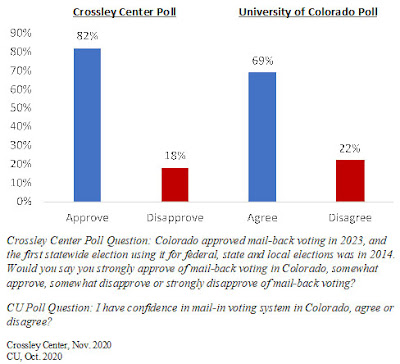 A University of Colorado poll showed 69 percent said they had confidence in the mail-back option. Republican convention delegates are significantly out-of-touch with Colorado voters.

Many of the same Republican activists have also challenged the voter approved initiative (2016) that allows unaffiliated voters to participate in primary elections. Their legal case was rejected by Federal District Court Judge John Kane on jurisdictional grounds, but in general, party activists, especially Trump loyalists (Donald Trump’s former attorney John Eastman represented the plaintiffs), do not want non-party voters to participate in the Republican primary, potentially diluting their influence on nominations.

See The Buzz: Colorado Voters Support Mail-in Ballotin, But Prefer Dropping It Off