The latest LA Times poll (published April 11, 2022) has Los Angeles businessman, Rick Caruso, in first place for the race for mayor in an election less than eight weeks away (June 7). Caruso, in his first run for political office, only announced for mayor on February 11, 2022 and was at the bottom of early polls with better-known candidates. 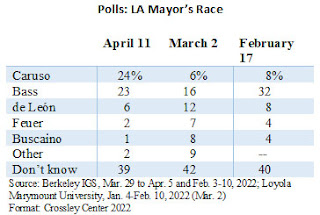 Since his announcement, he has spent $9 million, mostly on television and social media in a near saturation campaign. The other main candidates have made minimum expenditures, although Karen Bass, the other leading candidate, has money to spend at this point ($2 million). Expect big, big money to be invested in the race.

Homelessness, crime and affordable housing are top issues. The attack ads will start soon. At the recent debate, as one would expect, Caruso got the most airtime because he had to respond to the most attacks. His best lines: “There’s 63 years of career politicians on this stage” and “There’s a lot of empty promises.” Bass defended the political establishment with “stop denigrating” career politicians, “people who devote their life to public service.”

LA Mayor’s Race Gets a Serious Business Candidate
Clearing Homeless Encampments is a Crisis From D.C. to Venice Beach
Mayor’s Race in LA Focused on Homeless Crisis. Candidates Move to More Tough Than Love.
Posted by Floyd Ciruli at 9:36:00 AM