State and Federal Taxes Finally Get Californians Down

The Berkeley IGS poll shows two-thirds (64%) of California voters consider state and federal income taxes they pay too high. This resistance to taxes is a 10-point increase from 6 years ago when it registered at 54 percent.

They also judge their economic circumstances as worse off. Forty-two percent of California voters report they are worse off from last year, with only 21 percent saying better off. Nearly a reverse from 6 years ago (25% worse off, 48% better off).

While Democrats are somewhat less tax critical, more than half still say they are too high (54%). Most Republicans (83%) believe taxes are too high and no-preference/other (66%) are above the state average. 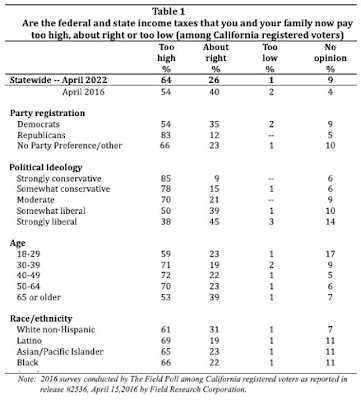