New Japanese Prime Minister Fumio Kishida has a 60 percent approval rating and momentum going into upcoming Upper House of Parliament election in July. Since being elected in October 2021, Kishida has had to deal with the tail of the pandemic, a stalled economy and a host of urgent foreign policy issues, including new threats from North Korea, a pact between China and Russia (Feb. 4, 2022) and the war in Ukraine (Feb. 24, 2022). 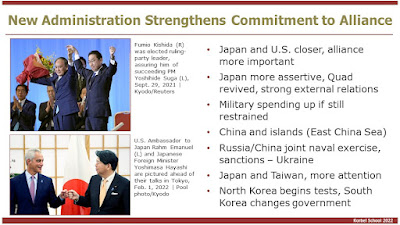 In foreign policy, Kishida continues the high-profile international relations initiatives of Prime Minister Shinzo Abe. Abe and the Japanese Foreign Ministry recognized early that the U.S. relationship with former President Donald Trump would need personalized attention. Arising the last decade was a much more aggressive China and renewed missile testing by North Korea. The intensifying threats required strengthening the U.S. alliance and relations with the Western alliance (in a geopolitical sense) in the Indo-Pacific. Abe continues to be a strong advocate of step-up military preparedness with increased defense expenditures.

Kishida moved quickly to join other Western nations in the boycott of Russia in spite of negotiations of still disputed islands from WWII (Russian has withdrawn from the negotiations) and purchase of Russian oil and other goods. A new government in South Korea creates at least some possibility of shifting the dialogue to national security needs from cultural legacy problems that have stymied conversations for several years. Finally, Japan has island chains in conflict with China. China is less than 100 miles from Taiwan, so that Taiwan and its security have become much higher priorities.

Kishida’s party, the LDP, could win a strong majority in the July election providing support for the fulsome foreign policy agenda.