French Pollsters Get It Right

President Emmanuel Macron won the first round of the French presidential election, with a five-point margin as predicted by final polls published last Friday. Because the election between Marine Le Pen had been closing, the Macron forces had been concerned they could slip back to second place. 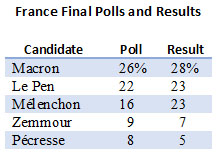 This is the second presidential election French polls have performed well. Last time Macron and Le Pen faced off, he won the second round by 32 points. The polls this time see a much closer second round vote (less than 6 points). The election is in two weeks – April 24.

Macron and Le Pen ran neck-and-neck in the 2017 first round presidential election (24% Macron to 21% Le Pen), pushing the traditional old-right and left parties of France off the stage. After this election, they appear defunct. The center-right, Les Républicains, candidate Valérie Pécresse, failed to even get 5 points, the threshold necessary in France to have party expenses paid. The old Socialist Party of former President François Hollande represented by the mayor of Paris got only 2 percent. The new left-wing party has been led by Jean-Luc Mélenchon, who polled better than five years ago (20% in 2017). He is a charismatic 70-year-old unlikely to leave a party legacy. Will his votes mostly go to Macron or not vote?

The battle line today is between Macron’s new “La République En Marche!” pro-European centrist position and Le Pen’s newly branded “National Rally” far-right nationalist position that is trying to soften its edges and emphasize economic issues. It should be close.