Russian President Vladimir Putin has an 83 percent approval rating and 81 percent of Russians approve of the war (53% strongly approve) according to Levada, the only credible Russian polling organization. Analysts point out that some element of the responses reflect that opposition to Putin and the war has been criminalized, and after more than a decade of mostly one-sided media messaging of Putin and the Russian nationalist positions on the U.S., NATO and Ukraine, it’s understandable that most Russians believe the state narrative on the war and support Putin’s leadership. However, as Russian analysts and longtime observers point out, there is an alignment with Russian experience since the collapse of the USSR and the rise of Putin that helps reinforce the narrative. 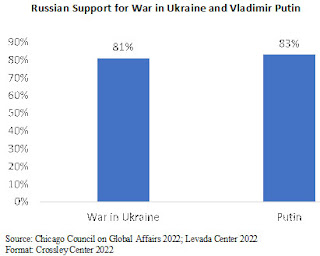 There is no basis to believe the public will demand a change of policy in Ukraine or change of leadership.