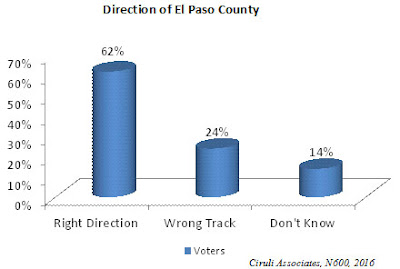 El Paso voters believe the “most important issue to deal with in next few years” is connected to growth. A near majority (47%) of voters cited growth-related issues, such as traffic congestion (35%), just “too much growth” (9%) or affordable housing (2%) as most important.

Crime-related issues were in second place (28%), including marijuana use, sales and dispensaries (7%); homelessness (6%); and police problems, shootings (3%). The final larger categories were local government issues, such as pensions and benefits (4%), and high taxes (4%), and the economy and jobs (13%). 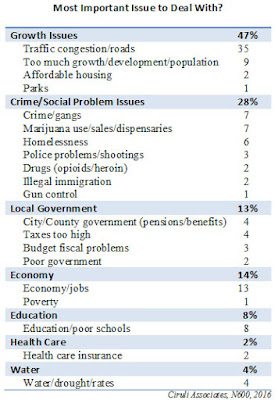 The survey was conducted by Ciruli Associates for the Colorado Springs Gazette with 600 likely voters on October 18. The margin of error was ±4.0 percentage points.
Posted by Floyd Ciruli at 11:13:00 AM