An extraordinary election. The female candidate gets more votes than her male opponent and more votes (63.6 million and still counting) than any candidate in history except Barack Obama, but loses the presidency. She lost a series of swing states in the rust belt by mostly small margins and the electoral vote 232 to 306 (when Michigan is declared, which she lost by about 11,000 votes).

Although counting is continuing, mostly in three of the West Coast states, which she will win by 60 percent or so, Hillary Clinton is now more than a million votes ahead (1.7 million on 11-21-16), more than any candidate in history among those who won the popular vote and lost the electoral vote. Al Gore was ahead by about 543,000 of George W. Bush in 2000. 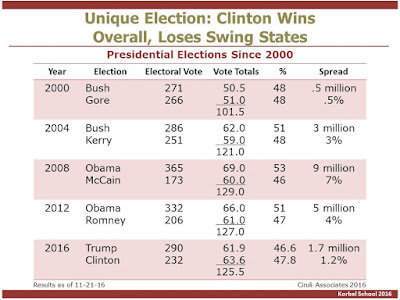 About 7 million votes went to third-party candidates in this election, exceeding Ralph Nader’s total in 2000 (2.9 million).

Turnout in general was about equal to the Obama election of 2012, but below 2008. Part of Clinton’s problem was that turnout was lower in those competitive swing states she lost. Many Obama voters simply did not turn out.

The turnout question in swing states isn't as obvious as it seems just looking at the national numbers. Nationally, one in six voters who supported Obama didn't vote, but a lot of those voters weren't in states where the outcome was close.

Turnout was down a lot compared to 2008 and 2012 (some have argued due to a new voter ID law) in Wisconsin. Felon disenfranchisement was also an important factor in the Wisconsin election results and without it, at a minimum that race would have been much, much closer.

It was down from 2008 but up from 2012 in Michigan, Pennsylvania and Florida.

In Florida, Trump did will compared to recent GOP Presidential candidates particularly in the suburbs. Florida would have been safely Democratic in all recent close elections if 10% of its population weren't disenfranchised based on past felonies (more than any other U.S. state).

It was almost the same as 2012 and down only slightly form 2008 in NC where Clinton lost by a lot. NC was part of the story polls grossly understating Trump support in almost all battleground and Trump states in the nation which led to bad tactical decisions by the Clinton campaign.