More Than Half the Vote is In

As of Thursday night, 1.5 million votes were turned into county clerks and the Secretary of State’s system.

In 2012, 2.6 million voted. It was projected that 2.8 million could vote this year due to growth in population and registered voters since 2012. If the estimate is correct, county clerks are going to have a busy final five days processing more than one million ballots that have to be dropped off by Tuesday at 7:00 pm.

If voter turnout is below estimate, Donald Trump is the most vulnerable. Hillary Clinton won the early vote, but was struggling with late votes. Trump desperately needs the late vote.

The latest turnout report has Republicans catching up to Democrats, but still lagging (7,000 votes) since mail-back voting started on October 19. 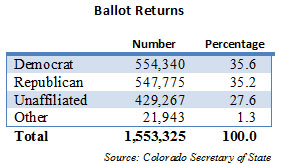