The Colorado Senate seat stopped being considered competitive on primary night, June 28. Darryl Glenn, a Ted Cruz conservative, county commissioner from El Paso County, was generally perceived as too conservative, too inexperienced and too under-resourced to win.

The Colorado Republican Party, like the national party, is still having difficulty finding a candidate that will attract its various factions, in particular its establishment. The polling averages give the seat to Democratic incumbent Michael Bennet by 7 points (which is the low end of the estimates). Nationally, the race to control the U.S. Senate is considered a toss-up. Close races are in Nevada, Wisconsin, New Hampshire, North Carolina, Missouri, Pennsylvania and Indiana.

The latest polls have Democrats ahead within the margin of error in four contested seats that could let them take the Senate (with a Democratic vice president), but with the slimmest margin (Nevada, Wisconsin, Illinois and Pennsylvania). But, the advantage is razor-thin and will depend on turnout. 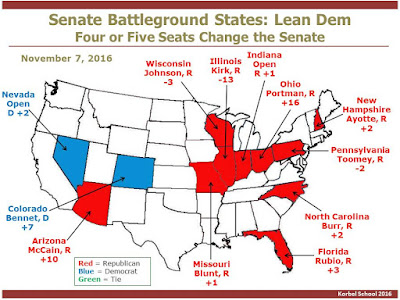