One of the big stories of the 2016 election is the Democrats’ loss of the white working class in the rust belt that has voted for Democratic presidential candidates for two decades or more. Donald Trump won close races with the white working class support in Pennsylvania, Michigan and Wisconsin. He won bigger majorities in Ohio and Iowa. 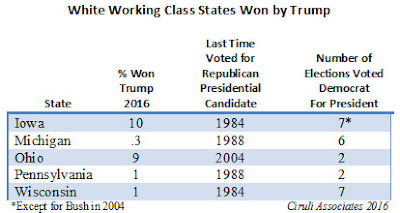 Colorado is not a working class state, and Trump lost the state by a narrow margin. But, he did well with white voters without a four-year college education. Nationally, he carried 67 percent of non-college educated whites and won degree holding whites by 4 points. In Colorado, he carried non-degree holding whites by 58 percent to Hillary Clinton’s 34 percent. But, she carried college degree holders by 14 points. The national and Colorado differences help explain his Colorado loss. 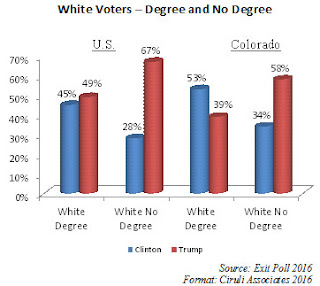 Pueblo may be Colorado’s largest blue collar working class county, with both an Anglo and Hispanic population. As of November 17, Trump is neck-to-neck with Clinton.


“This goes directly to the Democratic Party’s problem and Hillary Clinton’s problem,” said Floyd Ciruli, a prominent Colorado political consultant.  “They are losing the white working class and Pueblo is the cutting edge of it.” (John Frank, Denver Post 11-12-16)