The 2023 Denver’s mayor’s race is beginning, and homelessness is a major issue. It now dominates the 2022 mayor’s race in Los Angeles. The following report by the Crossley Center for Public Opinion Research describes the issue’s impact in Los Angeles politics.

After years of massive expenditures on housing and services with no visible relief from the growing homeless problem, LA voters are looking for near-term solutions. They want to clear the streets and sidewalks.

A new poll sponsored by the Los Angeles Times and the Los Angeles Business Council Institute shows that voters consider homelessness as the city’s top problem (94%), that it’s gotten worse (79%), and by 57 percent to 30 percent they opt for short-term shelter sites, contrary to the positions of homeless advocates who only stress long-term housing. 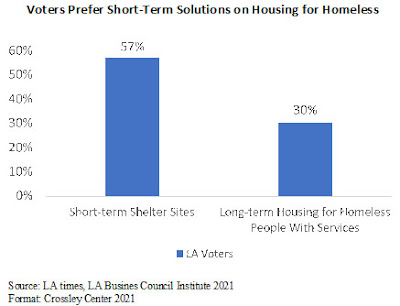 The poll was conducted by Peter Hart for the LA Times.

Although voters continue to express empathy for the homeless, they are clearly impatient and not satisfied with the region’s leadership. It has gotten the attention of the leading candidates in next year’s mayor’s race to replace Mayor Eric Garcetti, who’s term-limited and has been nominated to be the ambassador to India by President Biden. As the LA Times relates, after interviewing the leading candidates – U.S. Rep. Karen Bass, City Attorney Mike Feuer, Councilman Kevin de Leon and Councilman Joe Buscaino – the general sentiment was:

“Bass (U.S. Representative), Feuer (city attorney), Councilman Kevin de Leon and Councilman Joe Buscaino are among those who say the city’s immediate focus should be on short-term options that can help get people off the streets as soon as possible.”