Senator Michael Bennet is a very lucky politician. In what was projected to be a competitive race, he now has a walk. Labeled a likely Democratic hold by all the rating organizations and commentators, he is ahead by 13 points over Darryl Glenn in the current polling average.

Bennet beat out considerable competition to be appointed to the seat by Governor Bill Ritter in 2009 and survived a difficult Democratic year to win a narrow election in 2010. He could be serving the next six years with a Democratic president and a Democratic Senate (majority may need VP’s vote). 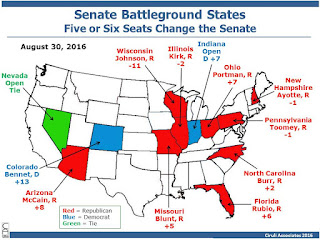 As of the end of August, Democrats have a good chance to pick up a seat in Wisconsin, Illinois and Indiana. They are very competitive in New Hampshire and Pennsylvania and recent polls show a close race in North Carolina. Democrats need to hold Reid’s open seat in Nevada, which appears close. They need 5 seats if Hillary Clinton wins and 6 if Donald Trump wins.

Working for them is presidential turnout (tends to be more Democratic), the possibility Trump underperforms in many states with Republican senators at risk, and the simple fact Republicans have 24 seats to defend and the Democrats only have 10. The race to control the Senate, as of today, appears more competitive than the presidential race.
Posted by Floyd Ciruli at 9:35:00 AM